After a rather harsh trip with 12 or so pieces of luggage through Sydney, we caught the plane to Darwin. By “we” I mean Teia (aunt), Cristi (uncle), Bogdan (cousin), Ira (cousin in law), Vero (mum), Nicu (dad), Andrei (brother) and Ana (myself). The trip to Darwin was about 5 hours long, so a bit like flying from Rome to Oslo, but it felt short, given that we were still in Australia.

As soon as we got to Darwin, the hot, humid air filled our lungs, the dry season was on its last foot. Bogdan and Cristi rented a couple of 4WD cars and we were off to our first little holiday home in Humpty Doo, a town close by. The name is like a combination of Humpty Dumpty and Scooby Doo, what’s not to love? Our adress was 62 Origin Close, Humpty Doo, which makes perfect sense, since that was our starting point for all the crazy adventures we would have next.

The house we stayed in was built by a lovely couple, Kathy and Adam. They built this Tropical Oasis in what seemed the middle of nowhere, with a forest at the doorstep. Waking up to a concert of wildlife is definetly an experience worth having in the Northern Territory. The swimming pool, the modern look of the home, the cockatoos flying by, the chickens me and Ira liked to visit (and feed) and our hosts themselves were such a joy!

I will try to translate the delirious writing that I did in my travel journal after the first day here, although some sentences might be too cute to leave out. For example “Today we went to Litchfield National Park, a charming, heat filled desert land, full of crispy plants and crazy wildlife. All those lizards!”

Our first stop was at the Magnetic Termite Mounds, where little termites build castles of red earth from north to south (I feel a Gaskell reference coming), in order to regulate the temperature of their home. A field of these architectural feats on a misty day can remind one of a blood curling thriller, as it looks like a cemetery.

Dad, mum and auntie next to a cathedral termite mound in Litchfield National Park.

A less gothic relative of the magnetic termites are the spinifex termites, who build majestic cathedral mounds like the one below. Spinifex is a type of plant that grows in sand dunes and arid regions. It produces a type of resin with sticky properties, which helps the termites keep their walls intact.

Did you know? Termites have more in common with the cockroach than with the ordinary ant.

After a scorching experience at the termite mounds, we were hopeful to find a flowing waterfall at Florence Falls. All our sorrows seemed to have disappeared as soon as our feet touched the clear blue lagoon. The fish were kissing our feet and we braved the foamy waterfall.

Our trip to the Northern Territory and Western Australia have given me perspective on how afraid I am of the world. Even a waterfall could suffocate me with its endless blessings. This first waterfall has brought me closer to embracing the wild and letting go.

After Florence came Tolmer Falls, a croc infested, much larger enclosure of fresh water. We cautiously took photos from the top cliffs and went on our way to Wangi Falls. Since September is towards the end of the dry season, it was no wonder that most waterfalls had dried out. What remains is usually a set of small lagoons, where wildlife flourishes. Saltwater crocodiles can get trapped in such enclosures as the dry season progresses.

Before reaching Wangi Falls, we had a short detour through Walker Creek, where we were hoping to find some lunch. Guess what, all the cafes were closed due to the small number of tourists popping by. We got to a campsite there and feasted on ice cream and cheese instead. Best lunch ever!

What can one say about Wangi Falls to truly describe its beauty? It’s one of those places that makes you wonder whether you’ve made the right choices in life. After passing a misleading sign of Free Wifi, we got to what was hopefully also a misleading sign: Danger! Crocodile Infested Waters. The threat level was low, but it still suprised me how many people were swimming in that lake. ‘They must be german’, I thought to myself, as  most incidents around the Northern Territory involve germans ignoring the warning signs.

Cristi was the first to brave the swim, Bogdan, dad and Andrei followed. Us women were watching them from a lookout point with mixed feelings. A gum tree full of flying foxes nearby was making a terrible noise. Golden orb spiders were hanging loosely over the dark waters. On our way to the lookout point, a large lizard, shaped like a miniature brontosaurus emerged from the foliage.

I was trying to grasp all of these creatures in my mind, while staring at the waters of Wangi. ‘Do you want to swim?’ asked Ira and my heart sank slightly. I was determined, however, that girls should be at least as brave as boys, so I went for it. We swam together, all the way to the waterfall. We even went into the 3m “jacuzzi” carved into the rock just to prove to ourselves that whatever the boys can do, the girls can do. It was becoming a funny imitation game, but we did it, we braved the swim! 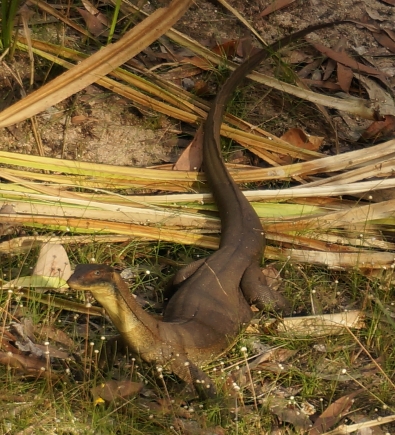 After we got out of the water, me and Ira returned to mum and Teia, who had been taking photos of us from a distance. A dark grey snake swam rapidly right beneath the wooden platform under our feet. ‘Good thing we saw this now and not before.’ I thought to myself. It was probably a harmless water snake, returning from its routine 9 to 5 job of taxing fish for stealing coins from tourists.

The sun was ready to set over Wangi Falls, so we took our superstar selfie and plodded home. A wild boar, whom we named Johnny and a bilby with no name (sob) made our cars stop a couple of times. We did some evening shopping, had a barbeque at our tropical oasis house and got to enjoy each other’s company a bit more. Bogdan and Andrei were still jumping drunk in the swimming pool by the time everyone else had gone to bed, full of anticipation for the next day.

Our superstar selfie at Wangi Falls (photo by Bogdan Nacu)