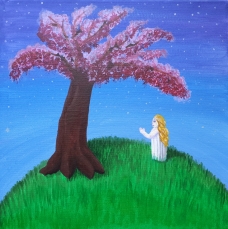 Josephine under the cherry tree

Silence grew deep over the valley, not a voice could be heard, not a breath could be felt. As soon as the last tired head tilted to enter his abode after a long day’s work, the sun sank completely.

Soft clouds of white smoke puffed contemplatively over the dark blue sky.  A recluse star here and there shimmered over the vast desert of dusk. Their quiet sigh remained unheard by the stone walls of the houses below.

A velvet cat went sharply over the cobblestones, brushing their damp shine with its furry paws. She turned on one of the many lonely alleyways with confidence that not a soul would cross her path.

The cat stopped briskly, her ears pricked with fright. She hid into the shadows of the houses on either side of the alley. A most peculiar scene opened up in the square in front of her.

“Mira turned towards the thistle, her eyes aflame from her mother’s lamp. She knelt in front of it and started digging at its roots. The faces were silent around her as her olive skin bruised and bled from the plant’s spikes. The moonlight started to fade, but she dug even faster as if summoning it back. Her breath trembled under the stares of her people as her teary eyes glistened in the fading light. The rays turned into darkness and Mira bursted into a suffocated wail. Her hands were soiled with the freshly turned earth. She wiped them on her white robe in desperation.” (On finding the golden keys from Voice Mountain)

“An old tall lady dressed in dark blue velvet was waiting patiently by the entrance. Her hair was tied in a high grey bun on top of a triangular face. Her pointy glasses shone in the light of a buzzing lamp, as she raised it to take a better look at Josephine. Without a word she turned slowly on the spot and walked towards the grand entrance with tiny steps. ” (On Miss Alma Letterstone from Voice Mountain)