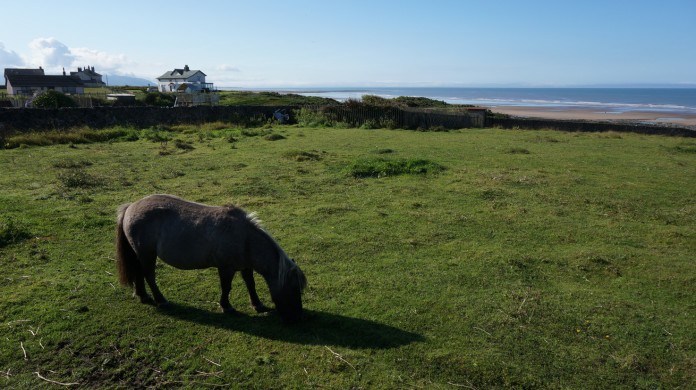 Dedicated to the lonely pony from Seascale

The wind howled. Mrs Bootle brewed her chamomile tea. She stared through her dusty kitchen window at Alfred, the house pony. He looked bored, or perhaps lonely. His mane was soaked, but he just stood there, blinking in a chewed up garden. Rain chipped at the glass, like sharp pebbles in a pool.

Mrs Bootle poured the tea in a flowery cup. The scented vapours steamed her round glasses. Alfred neighed in a low tone. The tide had come in. The pony turned his head to look at it flood the garden with a thirsty gurgle. He snorted, then climbed onto a boulder, unfazed. He turned his head towards the window to watch Mrs Bootle slurp her tea with visible noises.

A wave crashed over the small stone wall at the brim of the garden. The sea burst through the wooden gate. Alfred was knee deep in water. He watched a jellyfish swim past, as the wave retracted. Still he stood there in the rain, like a loyal rock. Mrs Bootle opened a newspaper. It had the picture of a seagull with a sea captain’s hat, eating an ice cream. A second wave curled over the wall, foaming at its tip.

Alfred frowned as water picked him up. He floated to the windowsill, his legs still stretched, as if standing. Fish swam around him, but he did not move a muscle. He kept staring at Mrs Bootle with a feeble twinkle in his eyes. Suddenly half of the stone cottage drifted off the sandy cliff like melting ice cream on a brownie. Salty rain drizzled the woman’s newspaper. Her flip flops soaked the intruding sea that was racing in through the opening.

Mrs Bootle reached to place her cup on its saucer, but found it had moved. She blinked audibly, waist deep in water. Furniture was floating around her, while she shuffled to the door. She opened it in time to see Alfred floating past. He neighed courteously as if tipping a hat.

‘Where are you off to Alfie?’ the lady creaked in a composed, upper class voice. She then grabbed her umbrella and sifted through the sea to reach her pony.

The house collapsed as she stepped off the porch. Alfred now stood on a little muddy hill, staring at the raging sea. Still he did not wince. Mrs Bootle gave a few strokes with one arm, her head erect, toffees in the other hand. She pierced the muddy hill with her flip flops as if escalating a mountain.

‘There you are my little lad!’ she puffed. ‘That is a pretty cloud, isn’t it Alfie?’

Alfred snorted and placed his snout on the bag of toffees. Mrs Bootle took out a lumpy piece and placed it into his mouth. His snout was foamy and grassy, leaving her hand sticky. She patted him with the sticky hand and giggled polite sounds. The swelling sea clambered onto the little hill. Past hooves and past flip flops it went. The sun sank behind the mount of water, as it swept over the sky and over Mrs Bootle and Alfred’s smiling faces.

Andy wailed, his chubby legs splayed onto the wet sands of Seascale. His yellow toy donkey was floating a couple of yards away.

Andy looked at her with round, twinkly eyes. He then giggled as he watched his big sister splash through the water in her flip flops. He then resumed splatting the little hill the sea had made of their sand cottage.